There are several issues I want to bring up.

Scott Ritter suddenly changed his narrative from “Ukraine is losing the war and no amount of help from the West can change that” to “Ukraine needs to hold on until the NATO trains their replacement army which is in the process right now, they just need to hold on until help arrives”. This honestly sounds like Hitler’s propaganda in 1945 – we need to hold on until the miracle weapons arrive and then we’ll revert all our losses and achieve final victory. Yeah right. Basically, I agree with Gonzalo Lira that the guy sounds as if someone gave him an offer he couldn’t refuse and he traded his reputation for mainstream acceptance. Someone from the CIA probably approached him and gave him a “are you with us or against us” offer. Basically, I would treat him as an outright CIA asset at this point.

As for the argument itself, it exists only within the Western disinformation thoughtspace; the idea that the purpose of Ukrainians is to keep dying, spending old Western weapons and laundering American freshly printed money in order to strategically weaken Russia is American idea and nobody with an independent thought in their head thinks that is a good plan, especially since the time-curve is that Russia is getting stronger and everybody else is about to have a crashing economy, mass starvation, fuel shortages and popular uprisings. Basically, it’s the Russians who have to keep the fire going and the West is going to end up in the post-Soviet 1990s. The most viable part of the Ukrainian army is being mopped up as we speak and there won’t be any of it left in the following weeks. After that, the Russians will deal with Kharkov and Odessa, probably offering them terms for surrender, because it would be either that or repeat Mariupol. What I actually expect to happen is an American intervention that would attempt to broaden the conflict significantly in order to complicate things for the Russians.

Another complication for the Russians is the fact that it might actually be immoral for them to perform tactical withdrawals from the territory they hold, because the Ukrops have shown a propensity for “cleaning up the traitors” at such areas, as shown in Bucha; basically, they execute all the civilians who in any way “collaborated with the enemy”. 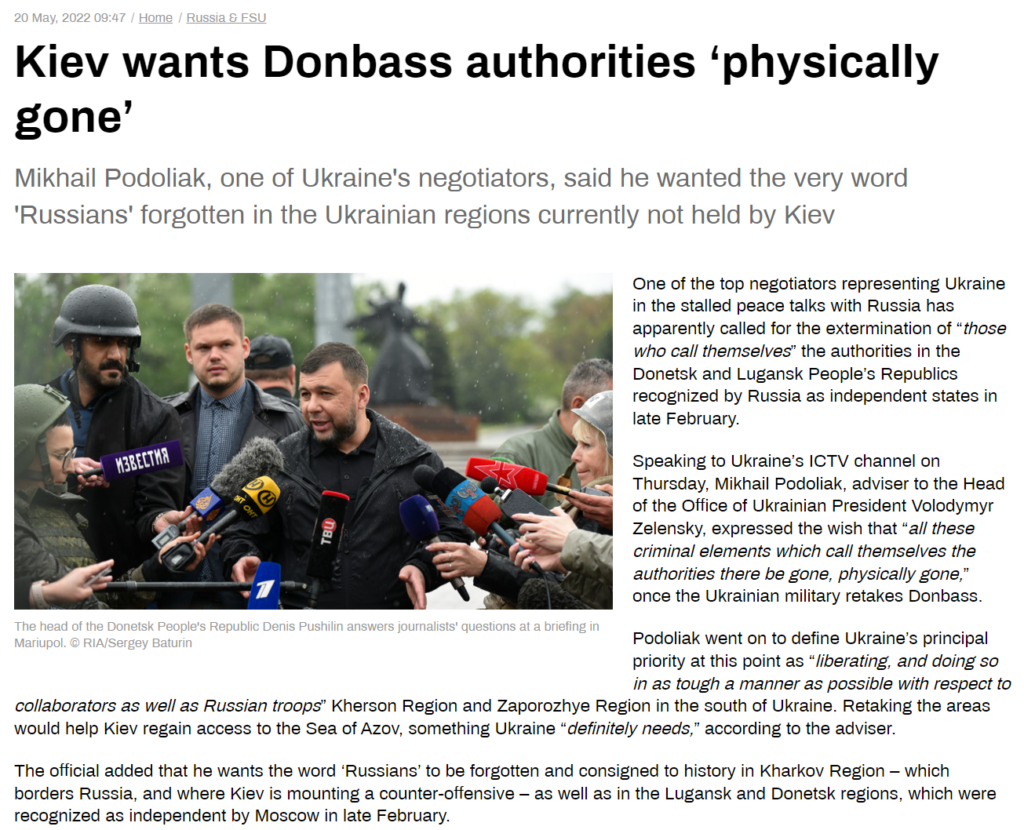 Anything the Russians hold, they must hold perpetually in order to protect the populace from the Ukrainian fascists. This is not easily reconcilable with the requirement of having the least possible number of troops deployed. Also, they might soon have tens of thousands of prisoners of war, and those will be the real hardened Nazis like the ones from Mariupol, not the common soldiers whom they might interrogate and let go. It’s a serious logistical problem since they are unlikely to kill them outright, and they can’t really let them go either.

That insane thing about the American abortion law, and the instant pro-abortion protests everywhere looks very much like a psy-op, and a very weird one, because it looks as if some AI running simulations recommended introducing additional intra-societal conflict in order to keep the populace in a certain psychological state it deems desirable. The entire thing is very weird and looks very much as if someone were tweaking variables. Also, the story about the next virus out there, the monkey pox, looks actually counterproductive. I’m having a weirdness overload from some of the things I’m finding in Western press, and it goes further than just common war propaganda; it looks artificial, synthetic, like something that uses principles devised by human psychologists but turned into society-control widgets tweaked by computers. Basically, it looks like the smart humans created a complex AI system and filled it with data, the system is saying what needs to be tweaked, and then the orders are given to the moronic humans who work in the politics, NGOs and the press to create artificial issues or aggravate existing but unsolved ones. This might actually be very close to the root of the problem.

The financial system is in a state of flux preceding a major crash and is conforming to the predictions postulated by the “Dollar milkshake theory“. The cryptocurrencies showed that they are only an extension of the stock market’s high-volatility, high-risk asset pool and not a new financial system, they are as restrictive as the fiat currencies and have by all standards failed. The precious metals are behaving more-less according to expectations for the rising-dollar phase of the crash, and according to my feeling for these things, the last train for getting out of the financial bubble was the end of 2021; now it’s already late in the game because if you were in the stocks and crypto, you already suffered huge losses, and if you were in fiat currency, the metals are now more expensive but still a good idea to get in while they are still available in retail, which might not last long; also, in the later phases of the Dollar collapse when everybody attempts to get into gold, the prices will skyrocket in the Bitcoin-like manner, and availability will be severely curtailed, because the governments will suck up all the 400oz bars in attempts to shore up their currencies, which will make it hard for retail product manufacturers to make coins and smaller bars. If you have confidence in “cloud gold”, basically “gold in someone else’s safe”, you haven’t been paying attention to what’s been happening to those who held gold “in the cloud”. America and the UK will outright confiscate other countries’ gold, and countries will outright confiscate private citizens’ gold with some lame excuse.

So, the US Dollar will be the last of the Western currencies to go down the drain, but I would recommend against going into the Dollar to save yourself, despite the fact that it might look very profitable in the short term, because it might be hard/impossible to get out of it, and you’ll end up with lots of numbers on the screen, unless you’re incredibly lucky and play it exceedingly well, and ride the wave of the “Dollar milkshake” by first going from other fiat currencies to the Dollar, exploit the growth of Dollar, and then manage to get out of it and into physical assets while they are relatively undervalued. However, I think it might not introduce benefits compared to what you would obtain by going straight into physical assets immediately, but it does contain significant additional risks, such as timing the things wrongly and being unable to get out, or only being able to purchase gold at exorbitant prices and incurring huge losses. I stand by my old recommendation of keeping only as much fiat currency as you need for monthly liquidity, and putting everything else into precious metals, and staging it in both physical and “cloud” storage so that you retain the flexibility of remotely allocated gold/silver for liquidity purposes.