I noticed one curious thing in the political arena: the only politicians who consistently say things that actually make sense and have any connection to the real world and the real people who live in it are placed on the “extreme right”. You know whom I mean: Marine Le Pen, Geert Wilders, Nigel Farage, Ron Paul, Donald Trump (and Ruža Tomašić locally in Croatia). The rest say all the politically correct, acceptable things and are mutually indistinguishable, and when you hear what they have to say you have an impression you’re listening to some computer-generated thing, because they don’t actually have opinions, they are like cult members who spew generic ideology.

I was wondering why that was, and I came up with several interesting ideas. First of all, I don’t think those politicians are actually any kind of “far right”, any more than I am. They are simply not indoctrinated by some kind of extreme-left crypto-Marxism which infiltrated itself into the universities and journalism, and therefore dictates the rules for political discourse and public debate of any kind. Essentially, it’s not so much that the rational politicians are on the far right, but that the distribution of the publicly permissible political opinions had been skewed to the left by several standard deviations, and common sense and good application of reason, which should usually be placed dead-center under the Gaussian curve, are still there, but the center of the main-stream political scene is between -1 and -2 sigma. 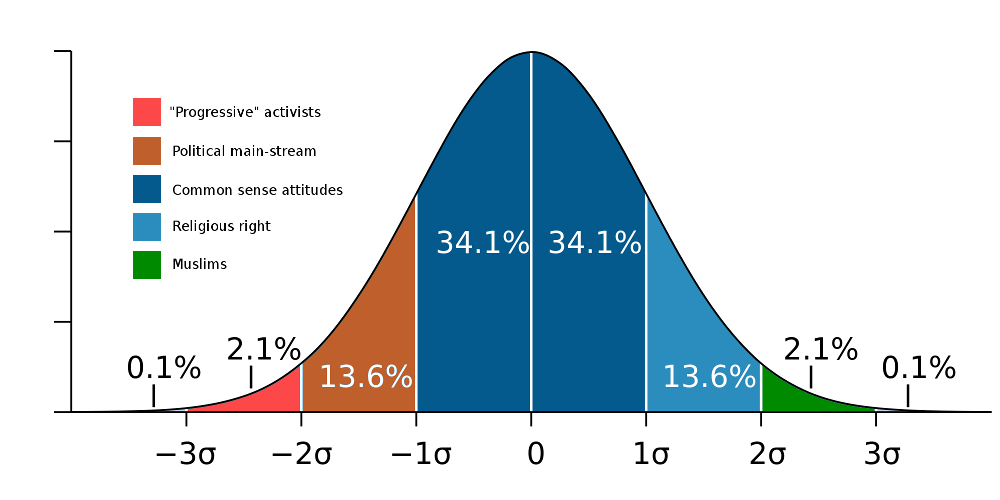 The real question is, what kind of virulent ultra-communism you would need to advocate today in order to be perceived as the “extreme left”, in the scene where people wear t-shirts with Che Guevara (a sadistic murderer and psychopath of the worst kind) and say that all white men and capitalists need to be killed, and it’s perceived as “cute”, “urban chic” and “main stream funny”.

The second thing I came up with is the reason why that is so, and the answer immediately suggested itself. You see, if you’re a Marxist intellectual, you can’t really be an entrepreneur or take part in some “bourgeois” activity, because Marxism doesn’t work in the real world. What you can do is either teach political philosophy at some university, be a journalist and thus preach your beliefs to the audience, or be a politician. If you don’t want to be part of the “main stream” because you’re too much of a rebel, you’ll take part in some NGO and you’ll be careful to say just the right things that will get you financed by George Soros and his soul mates.

So, we end up with a situation where Marxist ideologues teach future politicians, journalists, activists and university professors and that’s how you get a political scene where everything is skewed to the left so much it completely loses any touch with the common sense, and it’s continually pushed further to the leftist extremes by the NGO lobbyists who pose as the public opinion, while the real public opinion is continuously shamed as primitive, reactionary and leaning toward the extreme right, of course by the media, the politicians and the NGOs.

This is why it’s so difficult to elect a normal politician, and why it is so difficult if not outright impossible for a normal politician to actually implement a sensible policy, because the entire system, on the international as well as national political scene, has been taken over by the extremist communist lunatics, and they immediately react in total solidarity if someone starts to make dissonant noises, and that’s how you get the situation where someone like Nigel Farage says something that is pure common sense and logically follows from evidence, and he’s condescendingly smiled at by the pigs in the Orwellian animal farm.