I’ve been thinking about communism and capitalism and I found a nice image to explain one of the crucial differences and inherent mechanisms. 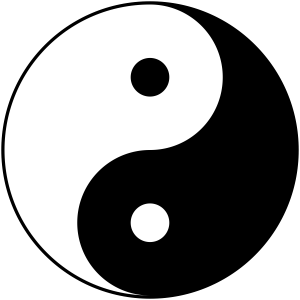 The yin-yang image from Taoism explains things by ratios of yin and yang, and the thing is, those never exist in a pure state: in the yin half-circle, there’s a dot of yang, and in the yang half-circle, there is a dot of yin. Essentially, this means that in perfect stillness there’s an aspect of activity, and in pure activity there’s an aspect of stillness.

There must be a poor minority in capitalism, because they serve as a warning to others, of what could happen to them if they fail. They are a much greater motivation for success than the few super-wealthy, who can be seen as completely beyond reach. However, everybody sees the homeless people on the streets and they are an omnipresent warning: get your shit together or that’s where you will end up. So, in capitalism, there is widespread wealth and localized misery; it’s really unimportant that some are super-wealthy and can afford their own jet planes, if the majority is wealthy enough to be able to afford a good house and a nice car. Eventually, as the entire country becomes super-wealthy, someone compassionate says “let’s eradicate poverty altogether”. Let’s raise the taxes for the wealthy, and elevate that tiny minority above the threshold of poverty. And people agree, because it’s hard for them to see how it could harm, since everybody is so well off. However, as they raise the taxes in order to funnel the money into welfare, the state bureaucracy grows, the difficulty of doing business grows, the taxes grow exponentially because you no longer have only welfare as an expense, but the price of bureaucracy, and in a generation the result of attempting to remove that tiny dot of yin in the sea of yang you actually expanded the dot. You made poverty widespread and wealth localized. Unfortunately, as that happens people vote for more socialist measures because they feel impoverished, and point at the rich thinking that they are who stole their money, either by not paying enough taxes or by outright exploitation. However, the thing is, nobody needs to steal your money in order for you to be poor. Money can simply vanish, by destroying the environment in which it can be created. Wealth is not a given, it’s an emergent property. If you have very few laws, for instance to assure that the contracts are honored, that the patents are obeyed and that the offenders are punished, but nothing more than what is essential, you will have a thriving society and wealth will be created. If you create a situation where people need to fill paperwork whenever they wipe their ass, and they are taxed so much they never get to have any money to spare, you don’t shift wealth elsewhere, you destroy it. What was once a machine of capitalism that produced prosperity and wealth, now becomes a quagmire of socialism that produces only bureaucracy, discontent and more socialist measures to combat the rare situations where anyone managed to have any money. So, by trying to eliminate that localized speck of poverty from a capitalist society, we destroy the capitalist society and turn it into a cesspool of poverty and socialist incompetence and ideological warfare.

In communism, there’s something called “corruption”, which basically means that the communist party leadership always manages to be well off, even in the countries where most of the population is starving. However, if you try to change anything, you will destroy the communist system. If you try to fight “corruption”, you end up decapitating the communist system, as it happened in Romania, and the entire country transforms into something else, it’s no longer communist. If you try to elevate the majority of the population into the middle class, as it happened in Yugoslavia, people start thinking in capitalist terms. They see socialism as restrictive, because if they can’t earn money for building a house at home, but they can do so in Germany, there’s something seriously wrong with the system at home. They are no longer the impoverished masses who are willing to embrace communism because it promises equal misery to all where at least they will have some food, they are the middle class who wants nicer cars and bigger homes. As a result of draining the swamp of poverty, communism turns into capitalism.

The conclusion is that it’s quite easy to destroy any system by destroying its foundations. In capitalism, you need to have minimalistic rules, no glass ceilings for the winners and no safety net for the losers. Then, as a result, you get widespread wealth and localized misery. Never attempt to remove this dot of misery in the pool of wealth because you will destroy the pool of wealth, and the misery will drown us all.