Someone remind me, why was the Watergate scandal such a big deal? Oh, a running president wiretapped the opposition during the campaign? And why are those who did the same thing to Trump not in serious trouble, fired or jailed?

President Donald Trump has claimed files about his former campaign adviser Carter Page confirm that the Department of Justice and FBI had misled the courts. Separately, he suggested his campaign was “spied upon illegally.”
Donald Trump on Sunday lashed out at the FBI and the Department of Justice, which released over 400 pages of its initial and renewed Foreign Intelligence Surveillance Act requests pertaining to Carter Page, Trump’s ex-foreign policy adviser.
Praising Judicial Watch, a conservative foundation that studied the files, the president tweeted: “As usual they are ridiculously heavily redacted but confirm with little doubt that the Department of “Justice” and FBI misled the courts. Witch Hunt Rigged, a Scam!”
In a subsequent message, Trump suggested his 2016 presidential campaign has been under unlawful surveillance orchestrated by his Democratic contender. “Looking more and more like the Trump Campaign for President was illegally being spied upon (surveillance) for the political gain of Crooked Hillary Clinton and the DNC,” the angry tweet said.
(Link: https://www.rt.com/usa/433944-carter-page-fisa-fbi-trump/)

Someone will say, oh, but Trump was suspected of having contacts with the Russians. No he wasn’t – in fact, the entire story started when Hillary’s campaign figured out it would be a good idea to spread this as rumors and even paid for the creation of the “Steele dossier“. So basically the same group of people invented the Russia connection and then had it “investigated”. It’s actually much, much worse than Watergate. It’s outright treason, an attack on the constitution and the way government and judiciary are supposed to work. Essentially, it’s an attempt to prevent the people of America in electing their own president, and then trying to prevent this president from doing his job, by fabricating reason after reason why he isn’t really the president so they are allowed to oppose him.

America’s state of government at the moment is something one can normally see during the early stages of a civil war, where one part of the country claims the government is illegitimate and breaks off. I’ve seen this in Croatia between 1990 and mid-1991. Yugoslavia formally existed and Belgrade was formally in charge, but that existed only on paper. In reality, Belgrade couldn’t implement anything.

Another thing that’s popular in America today is to suggest that everybody who doesn’t want WW3 with Russia is working for Putin. Beside this being obviously nonsensical (if Putin tries to have people not want a nuclear war, what’s actually wrong with Putin?), what’s the actual claim? That everybody who has an opinion that differs from that of the CIA and its hired scum works for Putin? The actual problem is that the CIA controls most of the politicians and the media in the “western world”, and, unfortunately, everywhere else, except for China and, in part, Russia. The Russians have some media presence in form of RT and Sputnik, and those became popular exactly because they are the only semblance of free press that we actually have – everything else is CIA controlled and spouts utter nonsense that fails to bear even the slightest bit of intellectual scrutiny.
The problem is, I’ve seen this kind of paranoia before, in SFR Yugoslavia, where they had labels for people who asked uncomfortable questions, and being labelled “counter-revolutionary”, “reactionary”, “opposing brotherhood and unity of our nations and nationalities” or something similar could make you disappear. This process of labelling took place for instance when the Croats and Slovenians asked where all the money went – they asked unpleasant questions and those who stole the money responded by calling the accusers “enemies of brotherhood and unity”, which is an idiotic accusation, both non sequitur, ad hominem and ad baculum at once – has nothing to do with the issue at hand, but slanders the opponent and implicitly threatens him. So that’s what I see in America today – a crazy society similar to Yugoslavia in its death throes.

With all this football world cup bullshit, I wish there was a nuclear shelter nearby wherein I could lock myself with water and survival rations, because this global bipolar disorder over ritualized tribal warfare thing is getting ridiculous. 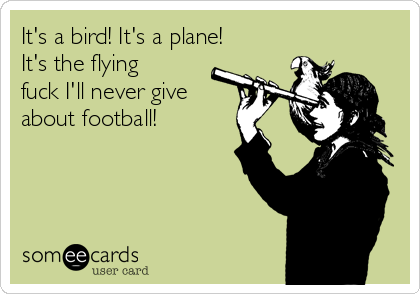