Having nothing more important to do, I’ve been learning the Nürburgring tourist track on the simulator.

The problem is, the pedals keep sliding on the floor, which does not contribute to accurate timing. 🙂 I drove the Audi this time instead of the BMW, they are very similar in almost everything, other than Audi wiggling and drifting a bit on the limit allowing you to save the situation sometimes, while the BMW just loses the tail and spins out.

Talking about the BMW, I repeated the same laptime with it:

I can’t seem to beat that time despite the fact that both cars could go faster; it’s just that I lose time on the mistakes that are partly due to the fact that the force of pressing the brake pedal actually moves the pedals on the floor and that messes everything up, and since I keep it close to the limit, imprecision during braking results in errors. The other cause of errors is me sucking. 🙂

OK, I think I memorized the track enough not to crash due to forgetting that bend; let’s speed this up:

And some fun in heavy fog:

My times are actually improving, even with the fog as a test of memory.

I actually shaved more than 10 seconds off my best time with the BMW:

There’s an expectation on the physical plane that individual beings have rights and privileges and legality of anything needs to be based on at least acknowledgment of that principle, through majority rule, if not outright consensus.

There is no such thing in “heaven”, or however you might call the higher planes of existence. The concept of everyone having equal rights is not only something that would be seen as strange, it would be seen as outright blasphemous. I will explain why.

You see, the physical plane creates a particular illusion, that existence is defined by the physical body. This creates an assumption that every-body has rights, and justice means equality of rights for all. However, if you remove the physical body, what remains can contradict this appearance greatly. Remove one body, and you have a whirl of energy, barely maintaining continuity of existence and consciousness.  Remove another body, you have a well defined “soul” with a complex history and deep consciousness. How do you even think about equality when the entire existence contradicts this concept?

Well, there actually is something similar. There is democracy in heaven. There can be a “vote”. It’s just that it’s not the “souls” that vote, because this is an arbitrary concept, since the “souls” can break apart or aggregate into more sophisticated structures. No, it’s the individual kalapas, the “particles of consciousness”, that “vote”. The more kalapas aggregate in a structure, the more value it has, because, for all intents and purposes, greater aggregation of kalapas into greater density-substances makes something “more of God” than something else. An astral bug is God to a very small degree. A Divine being that is crystallized light and consciousness is God to a much greater degree. That’s the closest I can get to describing it using human language, but it’s not very difficult to understand how for instance Jesus would be “more God” than a saint, a saint would be “more God” than a sinful soul, and a sinful soul would be “more God” than a soul so rudimentary it can barely maintain a continuity of individual consciousness.

Essentially, the kalapas “vote” by “choosing” to aggregate or to disperse, if you want to put it that way, and if something contains more kalapas it has more “rights”. It’s more complicated than that, because privileges can exist separately from the defining core of one’s being, but basically, if you meet a Divine being, saying “who gave you the right to judge me” might not be the smartest thing.

The concept of aggregation of kalapas forming souls is foreign to Christianity, but it’s commonly understood in Buddhism and if you think about it, it explains things much better than “God made souls to be different”. Well, yeah, you can put it that way, but aggregation of kalapas is how that happened, and you’re not an innocent victim of God’s whims, because your structure is a result of your own personal choices. For all intents and purposes, you created yourself by relating to everything else and defining yourself against God.

This means that the structure of authority in Heaven has nothing to do with democracy or “human rights”. It has more to do with “dignitas”, as the Romans would frame it. You have dignity that emanates from your being and is proportional to your spiritual magnitude. If you reduced your dignity by making evil choices, you might not be worth much and in fact your being might not last. On the other hand, if you made virtuous choices, if you always chose God before all other things and your actions reflected those choices, your dignity might be great, and will automatically grant you respect, privileges and, in fact, something akin to “rank”. Other beings might consult with you, your opinion will be sought and respected, and your will might have weight in all kinds of decision-making. It’s basically aristocracy, the rule of the virtuous, only for real. If you find yourself in a position where you lack personal dignity, and you act arrogantly as you were taught to act on Earth, calling upon your “rights” and questioning the “right” of others to pass judgement upon you, meat grinder might go brrrrrrrr.

And yes, as a postscriptum, lots of “dignitas” equals “imperium”, to keep it within the Roman analogy. Although, “imperium” is not something automatic that emanates from the soul-structure, it is a special thing that is granted, let’s say Divine Authority, literally the power of God or power sanctified by God, although I’m not happy with the formulation because it’s too mundane and sounds arbitrary, while it is everything but. It’s total and absolute.

Remember a year ago, when I first started talking about gold? Let’s see the snapshot of the gold price at that time: 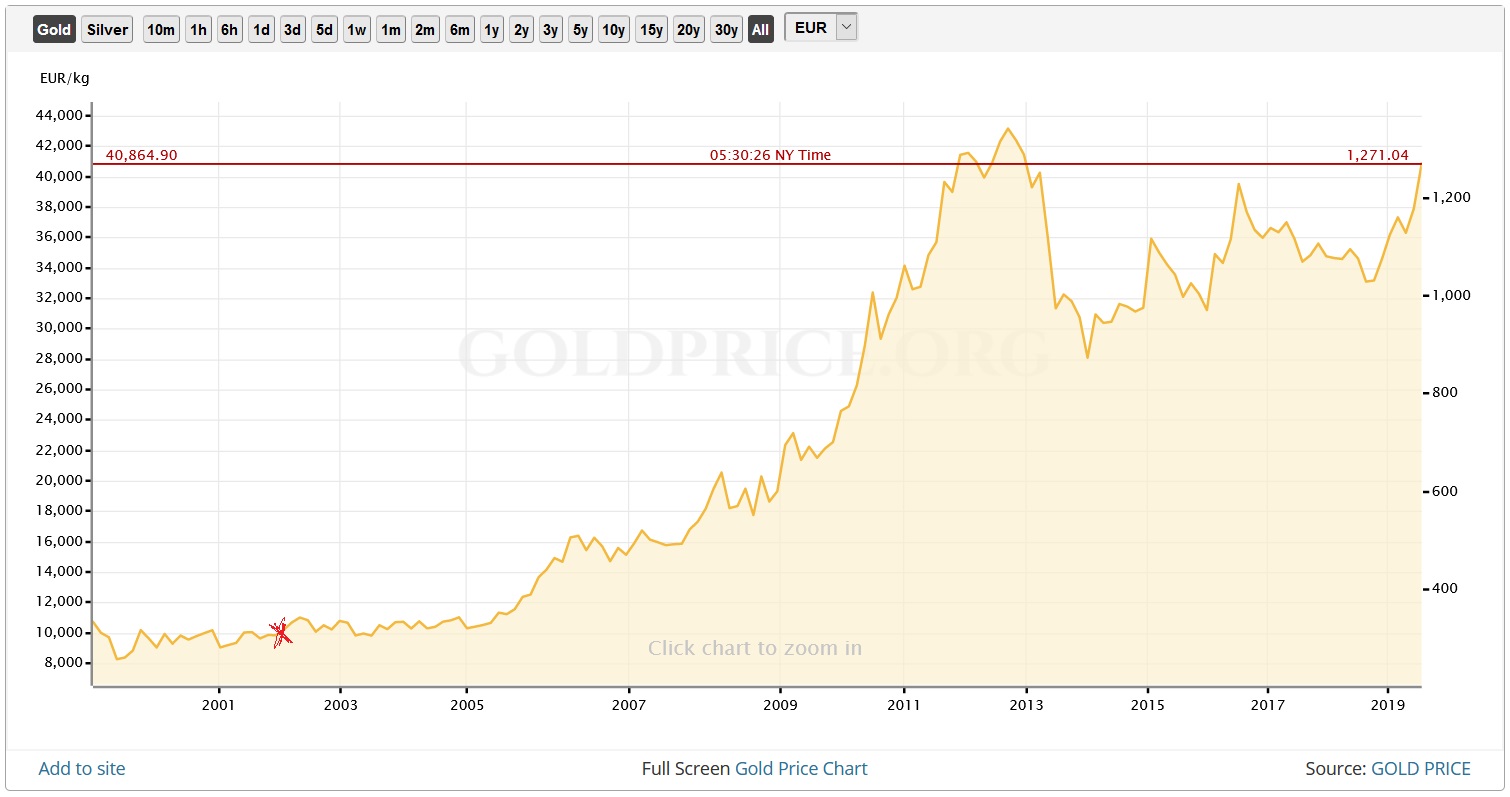 That was then. This is now:

Also, there’s that other difference: at that time I was recommending that you prepare for a medium-level disaster which is highly likely going to precede the complete SHTF scenario and a civilization-ending event. Well, about that medium-level disaster: we’re there. Do my recommendations still hold? Yes and no. This means, if you followed them in time, good for you, you still have money now. Is it still time to buy gold? Well, if you had a 1kg equivalent of gold in savings a year ago, and you had it in euros and didn’t convert to metal, you now have 750g, which is one 250g gold bar less. If you wait longer, you’ll still have the same number in euros, but it will probably buy a bag of rice. So yes, the best year to buy gold was 2005. If you didn’t do it then, late 2018 was good. If you didn’t do it in 2018, or a year ago when you thought I’d gone crazy because I started talking about hoarding gold ASAP, well, now you’re fucked and all your options are weak. You already lost a quarter of your liquid assets, if you had any, and now you’re forced to choose between buying gold at the all-time high, during a scarcity situation that caused an additional price hike, and with reduced availability, or you can wait and hope everything will be great somehow and you’ll be able to buy a Krugerrand for 350€ like you could in 2005. If you don’t have savings, now is actually a good time to have cash, because we’re not preparing for a crisis any more, we’re in the middle of one. Now is the time to have liquidity if you have to stock up on food, or pay the bills.

Just remember: when I originally issued warnings, everything seemed to be fine and my warning seemed crazy. Now that it sounds great in hindsight, you are no longer in a position to do anything about it. That might apply to other things, as well, so yeah.

A general warning was issued “from above” day before yesterday and yesterday. It’s a very simple message and I think everybody with astral sensitivity should be able to perceive and interpret it. It says, basically “prepare, it’s almost time”.

I’ve seen a lot of the astral plane in the last few weeks, and I’ve seen nothing there that would suggest rebuilding of the Earth, or any kind of future here. On the contrary, there were extensive preparations on the astral plane for the future *there*, so although it wasn’t explicitly stated, I don’t think the message meant “prepare in order to survive”, but “prepare to leave this place detached and with your affairs in order”.

Nevertheless, in case of the worst case scenario (that being more disasters that don’t actually kill us), I raised my family’s alert level from “yellow” (meaning, nothing is imminent but we need to maintain a state of readiness) to “red” (meaning, have everything ready in case we need to evacuate the building with backpacks).

The earthquake in Zagreb was quite disruptive locally, but overall, merely a local distraction of no wider consequence.

The COVID-19 is quite nasty, especially if you had the worst symptoms, as I did, but overall, it’s a minor thing blown out of all proportions by governments in love of dictatorial behavior, and panicked snowflakes using social media to virtue-signal about how terrible it is that people actually die.

The panic regarding COVID-19 is much worse, and will eventually kill much more people than the virus, because all that virtue signalling about value of human life broke the economy and that when that starts bearing fruit, you’ll wish you had the SARS.

All the noise about quarantine and the virus is too loud to hear a more dangerous noise:

Money printer go brrr, makes more money than ever. You be so rich, with all those zeroes on paper. You’ll be able to wipe your arse forever when you run out of all that toilet paper you stacked.