I just listened to Putin’s speech, and it looked more like a declaration of war to America, than a celebration of inclusion of the four new members into the Russian Federation.

Basically, no more “our Western partners”; he openly states that America is the nefarious global force that is everybody’s enemy and conspires even against the interests of their “allies”, and wants to plunder Russia for resources, keep it in a state of perpetual misery and conflict, impose strange ideologies to the entire world, and keep everybody in perpetual submission by the threat of force. It’s a defiant statement – you will do your worst, and we will resist you.

Yes, I would say that even the ever-conciliatory Putin is done with America’s shit at this point.

The Americans just sabotaged the Nord Stream I and II pipelines. Apparently someone in Germany seriously considered bringing the Russian gas back and the Americans just couldn’t allow such a thing. The Americans probably decided that the current government in Germany will not last for long and hardware solutions are more reliable than the political ones.

Europe is permanently fucked now, if anyone had any doubts about that.

But now that the precedent had been set, I would expect the Russians to return the favour.

Some things are certain.

Today, 27.9.2022., the Donbass referendum will end and the results will be published. What the exit polls tell us is that a vast majority, around 90%, of those participating in the referendum, voted to join the Russian Federation. Of all four regions, participation so far was above 60% of the registered voters. Quorum is 50%. This means that we can already state with almost-certainty what will happen next.

Tomorrow, 28.9.2022., State Duma of the RF will vote for the inclusion of the new regions in Russia. Also, with almost-certainty, we can predict that this will be approved.

Thursday, 29.9.2022., the Federation Council of the RF will vote. Also, we can predict what will happen.

Friday, 30.9.2022., Putin will deliver a message announcing the reunification of the four regions with Russia.

This is what we know. What I expect to happen next is all of American vassals to strongly condemn this, and introduce more meaningless sanctions against Russia – meaningless because they already did everything they could do, including things harmful to themselves. What remains for them to do is to sanction themselves more, basically. Also, Ukraine will increase shelling of the civilian population in those four regions, to punish them for being Russians. They got so used to doing that, it’s just normal for them now. However, and this is borderline speculation, when they do this, the result will be unexpected. You see, the special military operation in Ukraine will end, and be replaced with something else, also known as “war”. Ukraine will be recognized as an enemy country at war with the RF, and NATO will be recognized as directly participating in this. I say this is borderline speculation because the probability of this happening is above 80%. The other 20% consists of that Saudi attempt of brokering a peace that’s apparently going on now, and Putin is giving MBS quite a bit of slack in this; the attempt is rumoured to consist of Ukraine basically concede their losses and keep what country they have left. I don’t think any government in Ukraine can survive signing this, and America is not going to allow it either, so me giving it 20% is quite generous. However, if/when this attempt fails, it will be lights out for Ukraine, and I mean permanently. Russia will cut their electricity, oil and gas. They will target their power transformers,  power grid, railroads, all military installations, all political/command centres, and it will happen all at once, and you will then see what I meant by them turning the pain dial to 2, because it’s been at 1 so far. The counter goes to 10, mind you, but 2 means no electricity, no phones, no internet, no gas, no oil, no transportation, ahead of winter. 10 is what Berlin got in 1945.

The further we go, the more speculation I have to include, but let’s say it’s highly probable that America/NATO is not going to sit this one out, especially since their forces in Ukraine are going to be incinerated in the first wave of Russian war effort. Since they are known to act hysterically, it is probable that they will hit Russia with something. The result will be that the NATO bases in NATO countries used to coordinate and implement attacks against Russia will become smoking holes in the ground.

I expect the Americans to respond to this with more aggression, as usual, and I think they will hit the Russian defence ministry building in Moscow with a small nuclear weapon.

To this, Russia will respond by destroying the entire American and British military with nuclear weapons, but they will not yet target the cities, with some possible exceptions.

At this point, it becomes complete chaos.

Don’t ask me about the probability of nuclear war, because I’ve been predicting it since 2014. and I think it’s the highest-probability option for America to choose, in light of their economic collapse. They’ve actually been trying to provoke it for some time now, but Russia wasn’t ready, and wasn’t about to be drawn into something they can’t win. The fact that they now have a “bring it on” attitude says a lot. What we know is that the collective West has gone insane, their economy is in the process of disintegration, and misery will strike their population. Since they don’t have a reverse gear and are completely incapable of diplomacy because they are used to just assuming a high moral ground (which is strange for people who don’t believe in God) and dictating terms, and Russia is done with them, the logically projected outcome is violence.

It’s becoming clearer to me what happened in Ukraine recently.

Apparently, the Ukrops tried to have an end-summer offensive they kept harping about for months in order to milk NATO for resources, and now they had to show something. Initially, they attacked Kherson, but that ended poorly because the Russians treated this as a priority because it defends Crimea, so the Ukrops were either killed or repelled. Furthermore, the Russians intentionally set the situation up in such a way as to lure them into holding indefensible areas and slaughter them there.

Then, and this is quite important, the Americans and the British told the Ukrops that they have a better idea – they shared intelligence showing that the Russians only have token forces in Kharkov area, and they even sent their own men and equipment alongside Ukrops. The Russians also have intelligence so they found out about this and started to withdraw forces from this area in order not to sustain losses, and ceded quite a bit of ground in the process, including, and that is also important, some cities that are to become the sites of Ukrop purges of “collaborators”.

Apparently, this was a red line for Russia, and they decided they had enough of fucking around and it’s time to increase the pain dial to 2. Also, they decided that they had enough pretending that golden rain is falling every time America and Britain decide to piss on their heads, and this might result in Ramstein and some other locales being turned into smoking holes in the ground. Also, they stopped giving a fuck about the “international community”, and in the future they might just do whatever and tell the enemies to go pound sand.

The Russians stopped a centimeter short of declaring war on NATO, but I have a hunch they might give zero amount of fuck for anything related to chapter 5, and if something participates in war against them, it will fragment into tiny burning particles.

We are facing escallation of war in the immediate future, and all should assume this to be a fact and plan accordingly.

I moved into the new apartment I bought on Hvar island, so one can imagine I was quite busy, and obviously I did not follow the news anywhere as closely as I did in Zagreb. It’s not because I would be lacking in Internet speed; I have 35 Mbit download and 12 Mbit upload:

In Zagreb, I had a “homebox”, basically a router with a built-in SIM card that connects to the 4G network, and I had 24Mbit download and 22Mbit upload. Yes, the upload speed was higher, but the overall speed variability and lag were quite bad. Also, I have 5G mobile coverage here: 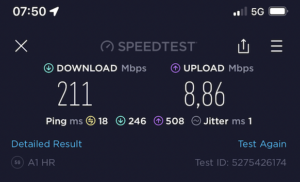 Of course that’s on half signal, this is on full signal: 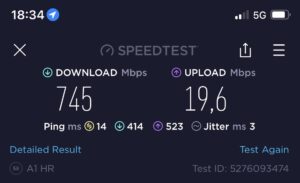 Upload speed is not great on either network, but I managed to get by with a fraction of that, so I guess I’ll live. The download speed is stellar, at least for my standards which are a tenth of this. There are no fiberoptics available on the island, which is unfortunate, but, also, I’ll live, since there weren’t any available on either ot the two locations in Zagreb where I used to live recently. All in all, my Internet connectivity is improved.

The reason why I’m out of touch is that I’m deliberately reducing my exposure to the news, because it was stressing me out so much I needed a break from it all, so it’s intentional and quite deliberate. I check my mail and keep connected to work, I check the private forum, but beyond that, I’m surrounded by a pine forest with crickets and I find this much more appealing than humans, whom I am thoroughly sick of. The main cause for this profound aversion is the fact that they are so abrasively godless, they literally hurt my spiritual inner senses for “listening to God”, and they, spiritually speaking, turn everything they touch into shit, like some kind of anti-Midas. A person who has God in their inner vision turns every place they inhabit into a tirtha, a place of pilgrimage. A godless person turns every place they inhabit into a pigsty, and they remember God only when they are in need of something to curse when they hit their finger.